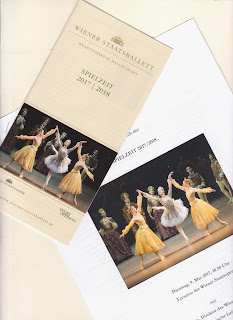 As the old song says: “Another season, another reason, for making Whoopee!”

Even if thousands of people have discussed this “Whoopee” (always “philosophizing” about its meaning), I am sure of a positive touch about it – and this sounds good, according to today’s press conference at the Opera that predicted a marvelous 2017/18 season – and a very carefully planned one too.

But before jumping into next year, here some “News” that are still going to take place during this season (that was not easy one due to the many pregnancies in the company – but on the other side, as reported, dancers like Liudmila Konovalova, Nina Polakova, Ioana Avraam and Maria Yakovleva got a chance to dance more):

The many casts for the upcoming “Swan Lake” are not only a logistic challenge but will also give some dancers the long awaited opportunity to make a debút on “Lake”. Robert Gabdullin, Jakob Feyferlik, Masayu Kimoto and Leonard Basílio will have their chance to play Prince Siegfried. On May 14th and 17th Semyon Chudin and Olga Smirnova (both from The Bolshoi) will play the leading roles. On June 4th other World Stars (this time from the Royal Ballet) will take over the roles of Siegfried and Odette/Odille: the gifted Vadim Muntagirov and magical Marianela Nuñez. 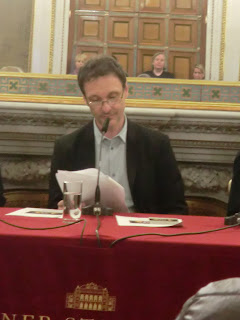 The Nureyev Gala on June 29th will be once more the “highlight” of the Season: a wonderful programme which includes, among many others, “Spartacus Pas de Deux” with Maria Shirinkina and Vladimir Shklyarov from the “Bayerisches Staatsbalet” (whom I recently had the opportunity to witness on stage in Munich), “Magnificat” (John Neumeier), that was in fact created for Sylvie Guillem and Manuel Legris, “Stars and Stripes” (Balanchine), “Solo” (Hans van Manen), “In the middle, somewhat elevated” (Forsythe) with the future principal of the “Ballet Zürich”, Elena Vostrotina and Vladimir Shishov, Balanchine’s “Tchaikovsky pas de deux” with Ludmilla Pagliero (Etoíle from National Opera de Paris) and Denys Cherevychko and “With a chance of rain” by Liam Scarlett (the same choreographer that did the “hit” “Frankenstein”).

Monsieur Legris talked about his participation as a member of the jury at the “Prix Benois de Danse” to which Wiener Staatsballet’s principal dancer Davide Dato was also nominated, the upcoming planed tounées to China and Japan as well the new DVD of “Don Quixote” that shall be released next autumn, about four new dancers joining the company: Andrés Garcia-Torres (up to now at the Volksoper) and three other (male) dancers, respectively from Italy, America and Belgium and about two Demi-Soloists leaving the company: Dagmar Kronberger that decided not to come back after getting her second baby and Greig Matthews that is joining the Joffrey Ballet. 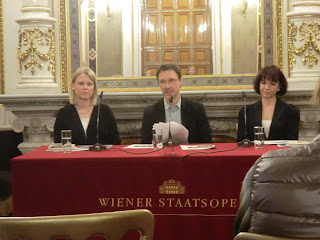 Mrs. Mag. Simone Wohinz, commercial director of the Wiener Staatsballet, informed us about interesting facts and figures: The Ballet had 57 performances at the State Opera and 34 in the “Volksoper”. Around 150.000 viewers visited the performances (plus 7.150 in Madrid, during the Tournée at the Teatro Real, in which 5 sold-out performances of Legri’s “Le Corsaire” were shown to Spanish audiences).
At the moment (44 performances up to now) at State Opera, the average seat occupancy is by 97,39% - in fact a peak figure when compared to international standards.

Mrs. Simona Noja-Nebyla, Managing Director of the Ballet Academy from the Vienna State Opera, delighted us all with all her energy and enthusiasm about the school, its team and pupils. 130 students from 22 different countries that are willing to dance and will have performed in 167 pieces by the end of the season. This means that they perform an average of 16 pieces a month (in a ten month-period) and that is an enormous accomplishment!

Manuel Legris resumed the conference giving the “news” for the 2017/18 Season:

A very “British evening” with MacMillan’s “Concerto”, McGregor’s “Eden” and the very special, lovely, passionate and romantic piece “Marguerite and Armand” created in 1963 especially for Fonteyn and Nureyev by Sir Frederick Ashton. This was in fact the first Ballet ever to be created to both. And how fitting that Monsieur Legris decided to use in it, exactly in the year in which Nureyev, if he'd still be among us, would have turned 80 years old.

“Peer Gynt” by Edward Clug, a full length contemporary work will have its Première on January 21st. Back to the repertoire are “Giselle” (which has not been performed in the Opera since 2011), “Nutcracker”, the “very round” programme “Balanchine/Liang/Proietto”, “Raymonda” (“Hopefully also with Olga Esina this time”, concluded Mr. Legris) and “Balanchine/Neumeier/Robbins” which will bring back the “beloved” Robbins’ “The Concert” (or “The perils of everybody”) – Surely a special homage to Jeromme Robbins’ 100th Birthday.

At the Volksoper Davide Bombana’s “Roméo et Juliette” with Berlioz’ music that, if I am not mistaken, was just used by Maurice Béjart until now. Back, to audience’s delight: Jorma Elo’s “A Summernight’s dream”and Patrick de Bana’s “Marie Antoinette” among others. 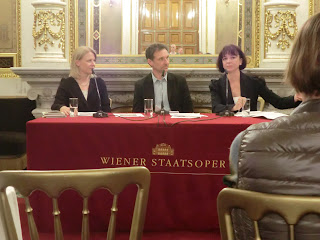 And of course “The Nureyev Gala 2018” that – as Monsieur Legris emphatically put it - will have to “top” this year’s Gala in honour of Rudolf Nureyev’s 80th Birthday: something not so easy to do due to the already known very high standards with which he has been “pampering and coddling” Vienna’s audiences during the last seasons…

But I am positive that he’ll surpass himself, as usual!