A première is always exciting.

This one was not supposed to be really very exciting for me:
I am not really a great fan of Neumeier’s work and I had the seen the general rehearsal last Friday.
But still…
I was very surprised. 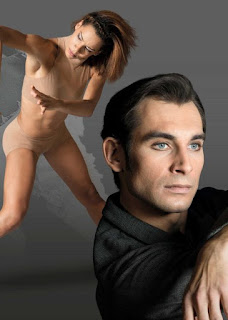 Before I start writing about what I have witnessed last night, I will break a rule.
Well, rules are made to be broken, at least mine are… by me: I always write about the main roles at the very end of a review but this time I must start with the words MIHAIL SOSNOVSCHI BRILLIANT!

Yes and even this adjective is still not really expressing what we witnessed yesterday with his interpretation of the tortured Nijinsky's soul.
This evening will be remembered because of him.

We all know dancers that are good actors but Mr. Sosnovschi’s performance was just “a notch above that”. 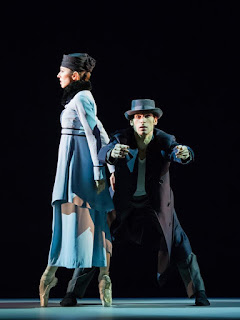 All of a sudden I realized that tears were running down my face with his interpretation.
Emotions… who could ask for anything more?
At a sort of career “top moment” (the moment in which a person reaches maturity but is still young enough to perform) he gave us a very sensible portrait of a tortured soul. Mr. Sosnovschi, an intelligent dancer that uses technique just as a tool for his artistry, he faced without fears the technical difficulties of the role (am I right that I witnessed twice triple tour-en-lairs?) and concentrated more in the character, telling the audience a “story”, making us eager to learn more about it.
A very intelligent reading of Nijinky's personality and character. The highest peak of this evening.
I dedicate this review to this most touching performance. I am glad that I could take part on it! Thank you.

Viennese audiences may be a bit over challenged by a piece that requires so much information and knowledge about ballet:
in the mad scenes there are many references to the original Nijinsky’s choreographies of “Faun”, “Petrouschka” and “Sacre”. But does the audience realize this?
If someone does not understand which roles Romola and Sergey Diaghilew (strangely mentioned in the programme as “Serge”) played in Nijinsky’s life, they'll miss a lot of the plot.
If someone does not know who Tamara Karsavina and Alexandra Baldina were and what “la danse siamoise”, the one movement from the Ballet Suite “Les orientales” represented for Nijinsky’s own sexuality, they are in troube.
If someone is not informed about his bipolarity. Then they’ll have a problem watching this show.

Neumeier’s language in Pavillon (which I had never seen before) reminded me of the same “formula” that he used in his “Dame aux Camelias”.
In “Dame” he uses fictional characters (Manon and Des Grieux) in pas de trois (with Marguerite) and even pas de quatres (including Des Grieux). 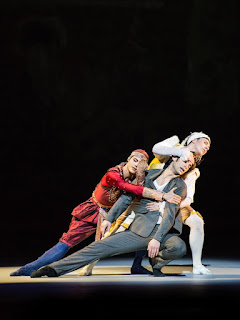 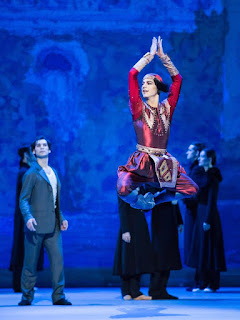 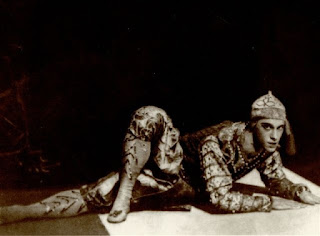 In “Pavillon” he does not use only fictional characters like the dancer from “dance siamoise”
(majestically played by Davide Dato – a dancer that never stops to surprise me… the thrill of the sensuality of this dance shivered the whole audience. I had to be sure about that, so I looked up in the dictionary: Shiver: a shudder felt down one's back, due to either fear, anticipation, nervousness, or excitement)
and Armide, played very securely by Nina Polakova. 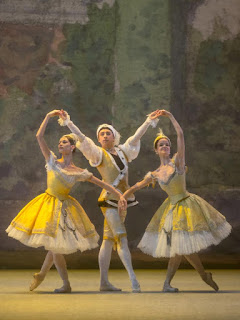 But also Nijinsky himself as a dancer (Denny Cherevychlo’s first entrance is a moment of pure poetry. Later he once more amazed the audience with his technique and stamina),
Tamara Karsavina (very well played “in the character” by Maria Yakovleva although a bit insecure technically),
Alexandra Baldina (danced with a certain emotional aloofness but with great technical certainty by Nina Tonoli),
Sergey Diaghliew (wonderfully danced and well interpreted by Roman Lazik, that also played the doctor - a fact that seems to have confused many people. A very sensible dancer). 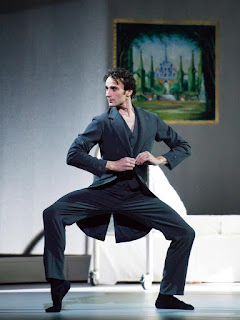 Nijinky and Diaghilew the PDD: Perhaps the most beautiful and openly homoreotic pas de deux in Neumeier’s repertoire. The kiss that Diaghlew places in his hand and puts on Nijinsky’s lips is a moment of pure emotion. 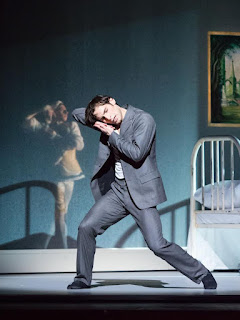 In the “present” Nijinsky is in company oh his wife Romola, very dramatically played by the very sensible and talented Nina Polakova that not only wore the most elegant gown of the evening but displayed emotions on stage that are not so usual in dancing. A beautiful, touching performance!

Choreographically speaking I found the connections from Nijinsky at the present to Nijinsky as a dance pupil quite difficult to follow.
If you’d not know that this dancer (Richard Szabó) was supposed to be Nijinsky as a young boy, you would not understand it. Perhaps the very different looks of Mr. Szabó compared to the classical fairness of Mr. Sosnovschi don’t give us the hint. A matter of wrong casting. A younger dancer like Mr. Wielick, that looks much more alike to Mr. Sosnovchi, would have suited the role much better.

Another interesting point that reminded me extremely of “La dame aux camelias”: the walkers in the park… It is so interesting to follow the phases in a choreographer’s career and find the similarities in works that they have done within the same period of creativy.
More to that later.

Le Sacre,
is not one my favourite pieces. Having been choreographed in 1972 it has become “dated” with all those endless repetitions of queues and rows and endless “passing through” back and forth, between each other’s legs. Over and under each other. It is so “dated” in its resolutions (unlike Cranko’s pas de deux, for example) and not an easy piece to dance.
And I am glad that I had never to learn how to “count” the music (although I love it!).
It is really not a very comfortable piece for the dancers. Especially for the corps de Ballet. That is why I start this piece of my review (again breaking an own rule) by writing of my biggest admiration and respect to dancers like Suzan Oppermann, Alaia Rogers, Céline Janou Weder, Laura Nistor, Leonardo Basilio, Marcin Dempc, Marian Furnica, Greig Matthews, Tristan Ridel, Dumitru Taran, Alexandru Tcacenco, Zsolt Törok, Géraud Wielick and other members of the cast. This piece is harder to play than to do a “Jane Fonda’s aerobic class” of the 80’s!

For me personally there are no “main roles” in “Sacre”. Sometimes I think that the last solo (danced, by the way, beautifully and with the stamina of a bull by Rebecca Horner) was just an excuse to pick “a name” as a “marquee name” to attract audiences back in the 70's. I am glad that Miss Horner is getting such roles - not an easy dancer to cast - she is neither the lyrical nor the classical "on you toe type" Ballerina. Quite difficult to imagine her in more "formal" productions but she seems to exceed in such productions, like the two Neumeier's choreographies in which she has been casted in the last two last years. But they are, unfortunately, very selden in the Opera's repertoire. 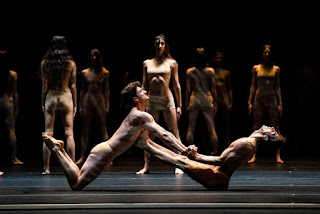 Back to the solo (is she going to be sacrificed or is she killing herself? That was never, since the 70's, clear to me!): We cannot forget that we are talking about 1972 and Neumeier was not so known at those times (later that solo would even be played by a dancer that was complete naked, I think her name was Beatriz Cordua).
But, also here, these are athe similarities during a choreographer’s period, which I wrote about while commenting on “Pavillon” and “La Dame aux Camelias”. This endless display of “power”, the repetitious hard movement solutions, the constant strength required for this last solo (that amazes audiences) reminds me of the last “Wife’s solo” in "Joseph’s legend".
It has the same language line, except for the endless running.
Funny how choreographer’s stick to something for such a long while.
Although I sometimes thing that the “young choreographer’s vocabulary” (he was young at the time) was perhaps too short.
And this brings a sort of inarticulateness at the end of the creative process. 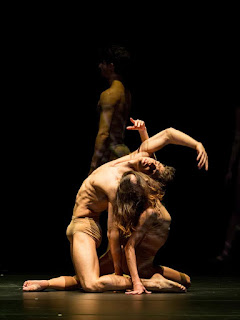 Nevertheless it was wonderful to witness once more the versatility of dancers that can do anything: Ioana Avraam, Alice Firenze and Eszter Ledan – wild, ferocious in fact, with their hair open, as well as the strength of Masayu Kimoto, Eno Peci and especially Francesco Costa, a young dancer that is turning into a very fine dancer – in such a short time.
A dancer with an extremely masculine presence and charisma on stage.

To add to all that we cannot leave unmentioned Michael Boder’s conducting. Always a pleasure.
A very enjoyable night.

All pictures, except Nijinsky's "Dance Siamoise": Copyright Ashley Taylor / Wiener Staatsballet. With my kindest Thanks.