Warning:
I did not go into "technical details" during this review.
The importance of the piece, its soloists and the story line are the central subjects and relevant aspects this time.
Thanks
Ricardo Leitner 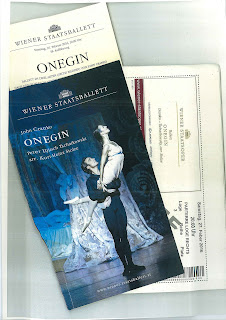 It is quite odd that I had never before seen „Onegin“. I mean live on stage. Of course I know this ballet nearly inside out from different videos and films but by strange coincidences I had never experienced it sitting in an audience. Amazing thing for someone who’s been “in touch” with Ballet for so many years.

Once, in Stuttgart, I had a ticket but in the last minute there was a cast change and I refused to watch it. As a very silly young boy I did not like Birgit Keil because of her neckline (or absence of it) and refused to go to the theater, wanting only to experience a live performance with Haydée. Well, this opportunity never came up againn and because of many other reasons and circumstances, which I cannot even recall, I never saw it “live”.

Well, there I was, sitting in a lovely box, while it occurred to me that I was witnessing live at last a piece that was merciless criticized after its premiere in 1965: “Solitary introverts are difficult to depict in dancing” – but isn’t that exactly what John Cranko does in the most marvelous way? Great John Cranko… if you’d only have lived longer.

Being a lifetime follower of Cranko’s work I do not only admire his choreographies (are there better pas de deux “solutions” than his?) and the way in which the characters are built (and slowly and very analytically reveal themselves to the audiences) but also the way in which his unique “power of synthesis” feeds the storyline without altering in any way what the story was meant to be.
Not being in mastery of the Russian language I do have to admit that my “knowledge” of the complex Pushkin’s lyric poetry comes only from two Onegin’s translations which I have read respectively in English and in German.
It is obvious for me that, without understanding Russian, one shall never be able to full understand/feel what Pushkin meant.
Even so there is the story line that Cranko composed – and the Russian “soul”: Eugene Onegin… and how this character influenced the creation of so many Russian male characters in Russian Literature...
This is more than a “personification” of a man - one that carries within his soul so many points that were (and are) identified with by its readers.
I ask: where does Eugene Onegin stop and where does the Russian man begin?
Where is all that melancholy hidden within a soul?
Perhaps in the music?
Drowned inside a Vodka’s bottle?
The thing is: Pushkin made this dark quality take a tangible form.

The whole cast was magnificently rehearsed.

The story is in perfect balance – as are Cranko’s “Taming of the Shrew” and “Romeo and Juliet” – with the corps de Ballet’s and the soloists’ appearances – which change, “grow up”, “ripen” in front of our own eyes. 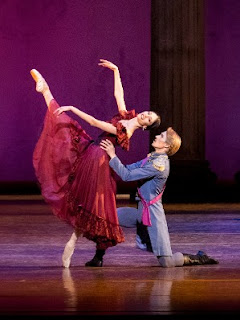 Kirill Kourlaev, had the “supporting role” of Gremin. And he made the best of it. Stage presence is something that Mr. Kourlaev has more than enough to offer. Another “gift” for his partners is the total self-abandon he shows while partnering.
An example for many dancers of the youngest generation.

Natasha Mair, for me one of the most promising young talents of the “Wiener Staatsballet”, gave us a performance that was not only technically flawless but also filled with emotion. Her “Olga” changes from a happy but very shallow character into someone that is confronted with pain at a very early age. Miss Mair, possesses a rare quality, which is simply described as “full understanding” of the role. She “feels” her step and does not only execute them beautifully. Something that is very rare in her early age.
Some four years ago I witnessed just this as I “really noticed” her for the first time as “Amor” (Don Q.) and ever since then, this very disciplined dancer, is growing as a performer in front of delighted Viennese audiences. 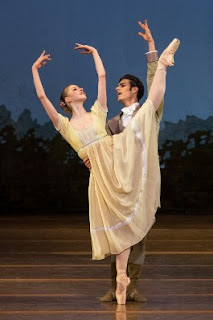 Davide Dato was the perfect impersonation of poor, tragic Lenski. Even though his variations are far from being called “easy” – one cannot forget that they were choreographed for a very special dancer, Egon Madsen, whose very strong points were not points that are usually typical for most dancers (if you do not know what I mean, think of Nureyev’s variations for HIS own male characters: they included everything that was “natural” to Rudolph – not especially for other dancers). 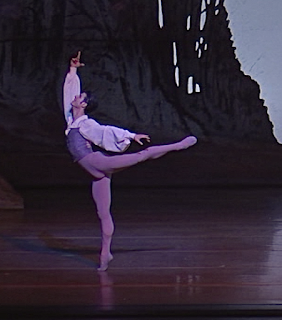 Mr. Dato gave a wonderful performance – also technically “top”. Not an easy thing to be so "clean" in those variations.

Ketevan Papava – in fact after yesterday’s performance I’d rather call her “La Papava” – was Tatjana in her essence. Shy – a solitary introvert (as mentioned above, according to the 1965 premiére’s critic) but an enormous fighter she also transforms herself during the run of the Ballet. Miss Papava, a great performer and always giving her best, filled the Opera with fine emotions. Every single movement, even the most subtle ones on her face, was in total command. There may be other dancers that are technically stronger or more “actress-like”, but you shall seldom find one in which all the “right ingredients” that make a grand stage persona are so combined, so balanced, so harmonic. Miss Papava was emotional but never over-dramatic… Her absolute perfect interpretation of Tatjana made me think about Marcia Haydée – even though they are completely different dancers, the “character” was there… 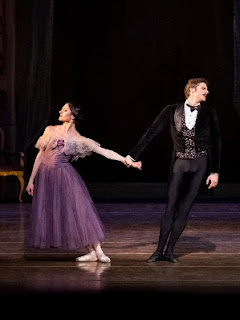 I wonder how she’d perform if the last scene, if the original version should still be staged, was the one in which after sending Onegin away, she’d go to her children to kiss them goodnight. She could make it. Instead of bringing down the house with her last cry, I am sure she’d be as touching in a low-profiled scene.

Vladimir Shishov on top form, in full command of his technique and stage presence. I was impressed by a change that took place in the first act: the “bored” Onegin, a character that is so very “blasé” that he is able to annoy us, was wonderfully played in a sort of cynical way. One could really dislike him. All of a sudden, in the scene at Tatjana’s bedroom, he turned into HER image of his character, the man that SHE idealizes. Amazing how Mr. Shishov jumped from one cliché to the other as if he was changing a pair of shoes – and never turning his interpretation into something sappy. Very controlled. 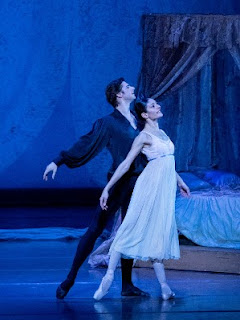 The point for me is: I confessed that my “understanding” of “Onegin” (as a character, as a piece) is quite limited because of the non-understanding of the original text… But who needs that if such a performance is given by an artist that transports all the emotional profundities of Onegin’s soul into our hearts, making those depths nearly transparent?

In some way, I must thank my instinct for waiting a bit longer, having decided to assist this performance with the right male dancer.

A magnificent evening, I confess. One that will be kept in my memory for a long, long time…

Dear Ricardo
Thank you very much for beautiful kritik

Thank you for the nice words! I am happy that you liked performance! This is my favorite role...

This is YOUR role! Really!