If you love John Neumeier and Richard Strauss this should be a treat for you... 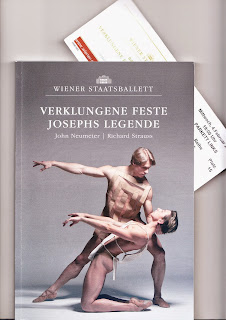 a piece that could be well described as „The party is over“ is a very interesting musical work: during the Second World War Richard Strauss orchestrated some dances from the 18th Century, music written by the baroque composer François Couperin (that is the reason why one is not “reminded” of Strauss while hearing it, a sort of commentary that I heard many times during intermission) and managed to create a sort of “intemporary” form of music. If I may say so.

John Neumeier’s choreography is clever (it should not to be confused with Pino Mlakar’s choreography to the same music and that carried the very same name and that opened in Munich in 1941). It is the sort of work you could compare to a fluent speech – one in which you have also the freedom to be sometimes repetitive – for example like his use of flexed feet during the first 15 or 20 minutes of it.

Having seen this work before, my expectation was a different one and my praise goes this time specially to the “casting” of the dancers: 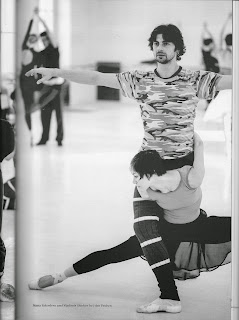 Miss Yakovleva, a very strong presence on stage (and, by the way, quite clever with her short hairdo that gives her another dimension) developed her artistry even more during the past season. Surely her period of recovery after last season’s accident gave her lots of time and possibilities to “go inside herself” and redefine herself.

Mr. Shishov, versatile, strong Mr. Shishov, impressed very much in this “dark role”, in which a bitter, angry mood is needed. Nearly scary.
It was so interesting to watch this wonderful Danseur Noble, the gentle prince portraying such a character. 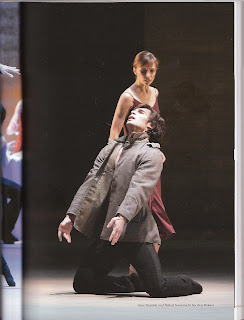 Lovely Miss Tsymbal, developed ther role creating a complete new persona for herself on stage – a beautiful new “reading” of the part that nearly “reinvented” Miss Tsymbal as a performer. Drama was added to her charming delicacy… and, surpinsingly, there was all of a sudden this hurt, suffering, mature woman on stage.
Fascinating! 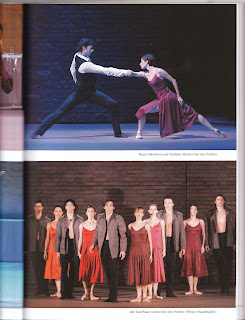 Mr. Sosnovschi – what can I say? – once more showed us his emotional vitality combined with precision and musicality. At the end of the piece, when all dancers stand in the back of the stage, either reclining or standing on the back wall, Mr. Sonovschi’s face stole the show because he was the center of all attention – and I, at last, found the words to describe a certain quality that I had known, but was not quite able to express:
Features that bring us the memory of a Modigliani’s painting.
Yes. The actor inside the dancer. 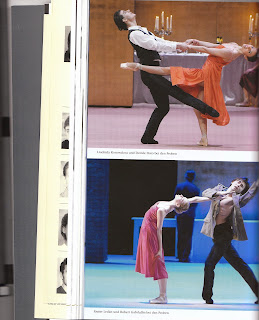 Kiyoka Hashimoto and Masayu Kimoto: dancers that always insist in “outpassing the last performance” and always manage to do that. Greatly! 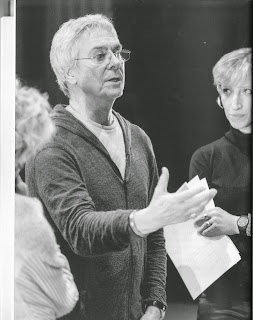 The most intelligent part of casting is yet to come: the “combination” of Eszter Ledán and Robert Gabdullin was the most clever, imaginative step of the creative process on this lovely evening: Miss Ledáns “fragility” (even tough she is a very strong dancer) combined with Mr. Gabdullin’s debonair charms were a very clever piece of casting. I had never seen them dance together and I wonder if Mr. Legris’ eyes also caught what mine did. I just hope to be able to look forward to the creation of another stage partnership which could bring much joy to the audiences.

The “Corps de Ballet” was exciting, dynamic – presences that begin to create a following like Nikisha Fogo, Natascha Mair, Laura Nistor, Richard Szabó and especially Dumitru Taran were there.

For me one of the beautiful things of such an evening – a Premiere one in which many “ballet fans” attend to – is also to hear the comments of member of the audiences about the dancers and, if I may say so, the names that I have just mentioned were being strongly discussed.

To beging with just a few information, just for the record:

Joseph’s, Potiphar’s and his wife’s story is a very known one in the Book of Genesis: Joseph, who had “visions” in form of dreams, was very much loved by his father and envied by his half brothers, who kidnapped him and sold him to Potiphar, a high official to the reigning Pharaoh. Potiphar makes Joseph the head of his household, but Potiphar's wife, furious at Joseph for resisting her attempts to seduce him, accuses him falsely of attempted rape. Potiphar casts Joseph into prison, from where he later comes to the notice of Pharaoh through his ability to interpret the dreams of other prisoners.

By the way: Potiphar's wife has no name: This is a way of making her seem less real… Medieval “Sefer HaYashar“, a commentary on the Torah, gives it as Zuleikha, as do many Islamic traditions and thus the Persian poem called “Yusuf and Zulaikha“ from Jami's Haft Awrang. There is no doubt that she, Potiphar’s Wife, stands as a symbol of Egypt - its decadence and cruelty, as openly interpreted in the Genesis.

Well, so much to the Genesis and to first part of this fascinating story…

The Legend of Joseph, Op. 63, is a ballet in one act for the Ballets Russes based on the story of Potiphar's Wife, with a libretto by Hofmannsthal and Kessler and music by Richard Strauss. Composed in 1912/14, it premiered at the Paris Opera on 14 May 1914.
I, personally, love one comment of Strauss, while composing “Josephs Legend” – specially if you think about Mr. Neumeier’s “reading” of it:

“Joseph isn't progressing as quickly as I expected. The chaste Joseph himself isn't at all up my street, and if a thing bores me I find it difficult to set it to music. This God-seeker Joseph - he's going to be a hell of an effort!”

End of the quote and (again) well, so much to historical references…

I am going to try an interpretation of what I just I had the chance to witness before yesterday.
I cannot really remember what I witnessed in 1977 at the State Opera, as I watched this piece for the first time while I happened to be visiting Vienna with my parents, with Kevin Haigen, Judith Jamison and Karl Musil. Even if I was already dancing I feel that I was too young. But I remember being extremely bored. That did not happen this time.

I am fully conscious that Mr. Neumeier’s work continued in its process of development being fully relaunched (Note: Albert Kriemler’s costumes are amazing!) and I am nearly certain that this was not the last version of it which I will be able to watch.
An amazing process, as Mr. Neumeier himself said during his Speech after the Show.

This new reading contains a theme that, if I may say so, no critic or Ballet commentator has ever wanted to refer to: Its homoerotic content. 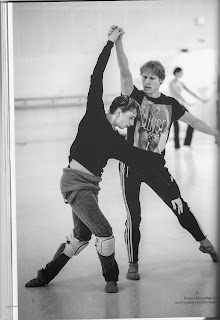 As the scene opens and we are confronted with Potiphar’s “court” we begin to be fully aware of the fact that we are not understanding if Potiphar is looking at the women – or at the men.
But we are able to quickly jump to conclusions when Joseph is brought to him inside the carpet. We see that Potiphar’s attraction to this chaste boy is much more than “love for a servant to his household”.

Then the nameless Wife enters the scene. We realize quite quickly that she and Potiphar are having “marriage problems” and, since we have been introduced to his suggested sexual tendencies just right before, we know exactly what might be going on.
Then the “drama” starts and the love triangle between Potiphar, his wife and Joseph goes on… just to be interrupted here and there by his “dreams” about the angel – another strong homoerotic display.

Like in “Ben-Hur” (the film), as I thought, most of the dancers are/were not aware of the “effect” of what they are/were doing on the audience…
Good direction leads to that.
Funny that Mr. Roman Lazik’s Potiphar reminded me so much of Charlton Heston’s untallented Ben Hur.
An actor that was not aware that he was playing a “gay” character and kept on going, highly mannered with his chin up.
That is the problem with predictable acting/dancing. 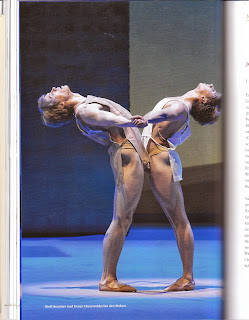 Kirill Kourlaev, in top form physically as well as in his sensibility as an interpreter, gave a marvellous performance. No question about that. The audience was extremely touched by his performance. But it always is. Mr. Kourlaev is a very beloved dancer. Deservingly.

Rebecca Horner, a dancer that I admire – not only because of her strong technique but also because of her intellectual approach to the roles she is playing (I like intelligent dancers!) - gave us an unforgettable “Wife” as present. Not an easy job being compared to Judith Jamison, I say. She was strong, smashing, daring… and extremely feminine altough she sometimes, while dancing with Joseph was the "yang" part of the duo – She did an extremely good job, even dealing with the senseless running at the very end of the play. Miss Horner “light years” away of being badly directed in pieces like “Sheherazade”. 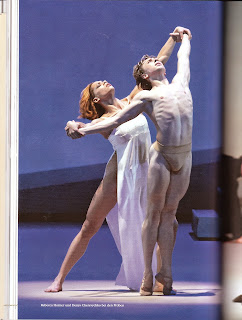 Denys Cherevychko… lovely, talented Mr. Cherevychko… Amazing how he mastered the role of Joseph – and I am not just speaking about his technique which is very known to the Viennese, French and other audiences. It is not an easy task for such a master of male “Bravura” also to convey a feminine side to the character (which is quite required in this new “reading” of the piece). Most of all I was impressed by his mastering of a certain “yin and yang-Balance” combined with the technical demand of the role that accompanies him throughout the evening – and how tiring this must be. He never leaves the stage and can only “rest” perhaps for three minutes…

End of the evening: Applause like I have not experienced in many, many years. A huge success. The screaming was so intense that I thought that I was in a soccer play. Incredible.
Another “Conquest” of the Legris’ era in Vienna.

And about the audience’s reception of “Joseph” again:
I begin to understand Andrea Amort’s words about a “wiener Ballet” (a Viennese Ballet) even tough “Joseph” (like a “so-called” classic like “La Dolce Vita” from Fellini) is a piece of Ballet that is quite “dated” on its content, message, language in spite of its new “reading”. The effect on the Viennese audience is quite simple to describe. We live in a country that refuses to adjust to newer times – but I will not go into that, just read some Austrian history and you will know what I mean. 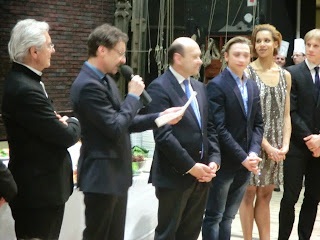 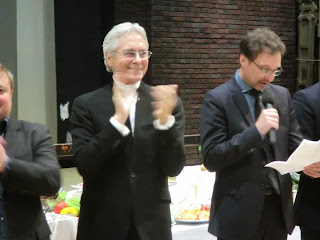 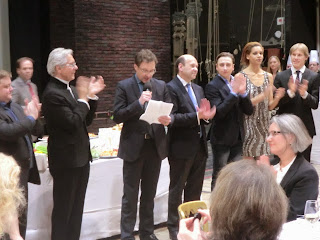 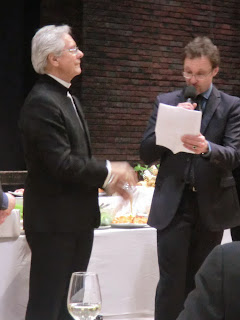 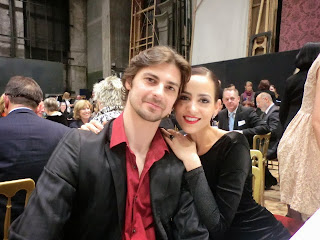 You have quite the historical knowledge Ricardo!

So beautifully written!!
Wish I could have been part of it...