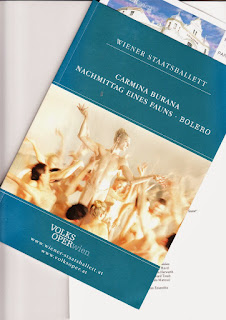 Yesterday’s performance of Carmina Burana – Prélude à l'après-midi d'un Faune –
Bolero was a very different one from the one that I had seen nearly one and half years ago. There were many changes and obviously I must have changed too…
http://tertulhas.blogspot.co.at/2014/01/carmina-burana-bolero-afternoon-of-faun.html

“Bolero” which I have once criticized for its lack of inventivity was astonishingly refreshing, young and strong. One can “feel” that the company is growing together – group work on the first place of priorities, not individuality. I know that this may sound like a bit of a “Shangri-La dream” (and we know how ballet companies “function”) but that is the general impression left.

“Faun” was a bit disappointing, sort of lacking the strength and interpretation which I have already experienced. Both dancers seemed be “doing the steps” and not really feeling them. Mr. Shilov, that I know from other roles and has a “drive” as a dancer, seemed distracted. Miss Kertész aloof: very indifferent and uninvolved with what she was doing.

But “Carmina” (which in fact should be called Carmina Burana: Cantiones profanæ cantoribus et choris cantandæ comitantibus instrumentis atque imaginibus magicis ) was yet to come. And what a joy it was to “re-read” this choreography with (perhaps) more tender eyes, not so critically but enjoying more instead of examining it too much.

I was touched to see Kurt Fuckenrieder on stage, a dancer I shared the stage with during his first performance ever and took “care of” because he was such a young boy (I think it may have been 1982 or 1983, in “Zarewitsh” at the very same Volksoper) and Gaby Haslinger after so many years.
Lázlo Bedenek strong as “Fortuna”, lovely Natalie Salazar as the young girl, Patrick Hullman as the husband and Tainá Ferreira, giving a new “reading” of the wife’s role.
One may call Miss Ferreira’s performance, even if still such a young dancer, “ filled with maturity and delicacy”, with a new understanding of this character.
It is always obvious to the members of an audience watching a certain performance, which artists have given thought and time and care to form a character – questioning, asking, breaking rules, changing opinions - and undergoing changes.
These special moments always make me remember Charles Bukowski’s forgotten words:
“The problem with the world is that intelligent people are full of doubts while the stupid ones are full of confidence”.

Résumé: an enchanting evening and to quote the Cantata itself (in one of its most alluring and enchanting parts) I must repeat the lyrics from “In Trutina - they simbolize the essence of the evening's mood.

Thank you Ricardo Leitner for such a nice review!!!

Thank you Felipe for having liked it!

I see, not a very popular review.How come?this guy above.I don't understand he says thanks but who is he?take care Mike
ps. how's your summer?