A „special“ première at the Opera… “special” due to the fact that “Blaubarts Geheimnis” (“Bluebeard’s Secret”) is already well-known to viennese audiences in its full-length version. But the combination of such different choreographers like Stephan Thoss, Christopher Wheeldon and Jerome Robbins seemed quite promising even though I was not quite sure of what to expect.
But from one thing I was sure; of the privilege to be able to witness again Alexander Ingram conducting!

Stephan Thoss’s “Blaubarts Geheimnis”: not being a favourite of mine, even if quite well rehearsed, I must admit that the shorter version was much pleasant to watch than the artificially constructed whole evening programme, as I have already mentioned last year. 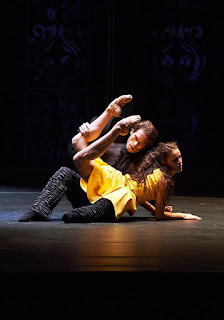 The plot line is opressive. Nearly depressing. A fact that is constantly helped by Philip Glass’s music. The constant sexuality is sometimes exaggerated, in an excessive repetitious way.

Kirill Kourlaev – a dancer that understands what dramaturgy is all about, possesses a very unique presence on stage. He dominates this difficult character in all its small details even if, in his own words, he is sometimes scared of it. 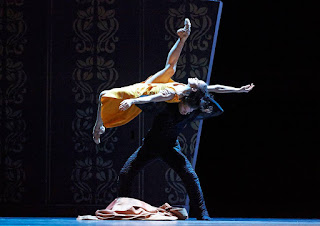 Alice Firenze’s “Judith” is, for me, the narrator of this story. She reminds me of a curious “Alice” (in Wonderland) going through all the doors. Very attentive, learning, understanding - or not... Miss Firenze possesses a fine dramatic artistry that is strongly involved by the cellophane of theatricality. Controlled theatricality underlined by an endearing sincerity. Not to mentioned grace and technique.

Andrey Kaydanovskiy’s strong presence on stage at what he can do best, should be mentioned. I wonder how this dancer would grow as an artist in a more contemporary environment than the Vienna’s State Opera.

Rebecca Horner, a dancer with a strong tendency to one-dimensional characterizations, compensated this lack with aggressiveness while interpretating the character, just to overact it - too much. This posture intensifies the “cliché” of the “contemporary dancer” that many dancers of traditional Companies, when confronted (for various, different reasons) with a more modern repertoire tend to adhere. Her “Bluebeard’s mother” was too threatening, too much. This is a fact that reminded me strongly of two of the most horrendous literary characters ever written: “La Cousine Bette” (Balzac) and “Juliana” from “Cousin Basilio” (Eça de Queirós).
And that is definitely too much.
Even though I can understand that it is too difficult to follow into the more experienced footsteps of Rafaella Albuquerque Sant'Anna and Dagmar Kronberger in a role like this. 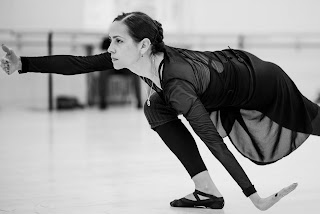 Christopher Wheeldon’s “Fool’s Paradise” – the surprise of the evening even if Joby Thalbot’s music tend to portray a very strong pathos. In quite an epic quality that could be misinterpreted (as americans would say) as “tacky”. 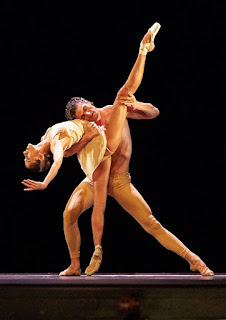 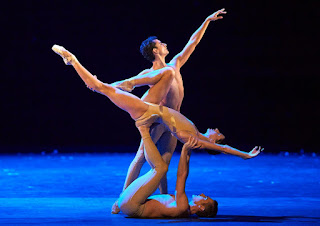 The choreography is so well idealized that it is nearly impossible to concentrate on single performances instead of on the group. Simply pure harmony. Even so I could glimpse at amazing performances: Davide Dato, stronger than ever, Ioanna Avraam in an exquisite display of emotions, charming countenace and lovely lines, Kiyoka Hashimoto, Eno Peçi, Greig Matthews. It should but be said that the boy’s costumes by Narciso Rodriguez, were not ideal in this particular case due to the fact that some of them should take more care of their waist line. 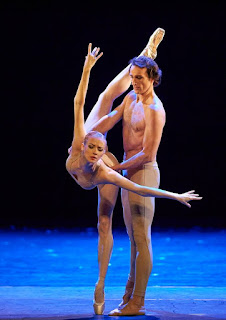 Two interpretations should be highlighted: Olga Esina’s precise performance in full-command of her technique. Since quite a long time this strong dancer, that was once ironically called “The Grace Kelly of Dance” (because people thought that she was cold and aloof) has been gaining “a new aura”. She has been creating powerful characters. Her subtle interpretations are filled with such strong energy that she attracts the audience’s attention like a magnet. She is reaching that special moment for an artist – the one in which youth and maturity melt into each other. I am looking forward to all she’ll give to her following in the next years. Gala Jovanovic, was fabulous. I could only describe her in this piece, as beautiful. An exquisite bird of paradise-like quality – with beautiful arms - emerged from her and filled the Opera House. 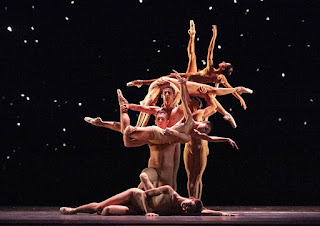 All in all, pure harmony in a very intelligent piece of work that should be noted for its subtle “re-use” of movements, passages. Touching. Emotional. In perfect balance. A very dangerous and difficult language technique that should be used like a medicine – just in the right dosage. It is either perfect, like in “Fool’s Paradise” or it is simply repetitious and boring, like in “Blaubart”.

Jerome Robbins’s “The four seasons”. I had not seen it since 1979 – and had so much hoped for other costumes than Santo Loquasto’s (which I intensely dislike). This pleasure was not to be granted to me… 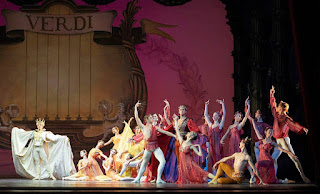 Robbin’s choreography is demanding. But definitely not one of his best. 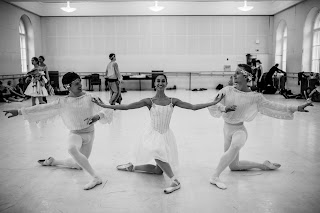 “Winter” was marvelously danced by Ioanna Avraam, Dumitru Taran and – for the first time (for me) in a soloist role, Géraud Wielick. All three of them excelled in the quickest part of of the show as if they had been dancing this all their lives.

“Spring”, the most boring piece of choreography from “Seasons”, danced by Mihail Sosnovschi and Maria Yakovleva. Mr. Sosnovschi, even if professional as always, danced through it this time quite emotionless, as if he was bored, forcing himself to smile broadly and artificially just to fade again into seriousness. Miss Yakovleva proved once more that she is a clever dancer. Perhaps too clever for my way of thinking and taste. Even though very technically limited, she can hide these flaws and give a good impression because of her looks, “mignon” physique and lively way. Viennese Audiences, still in need of learning much about Ballet, usually welcome her performances overseeing what should not be overseen. I wonder how audience reception would be, for example, in London, where there is real respect for technique (and deep knowledge about it). 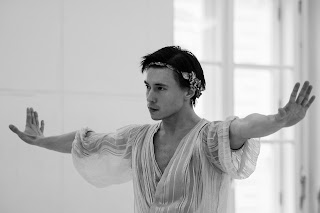 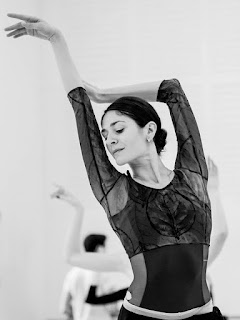 “Sommer” danced by Ketevan Papava and Robert Gabdullin, both giving a very touchy, calm, romantic performance. Beautifully rehearsed, in perfect harmony with each other. Mr. Gabdullin sent me to exotic worlds. Miss Papava and her joyful, relaxed smile… Later she told me about the ways she visualized the role, how she motivated herself and thought of how to make something beautiful and interesting to the audience out of this “simple” piece. Emotional intelligence some would say. Yes, but I prefer to refer to it as “real talent and Artistry”. In a world in which the ballet technique changed so much, in which (nearly) every dancer has a great technique, lovely feet, great extensions, turns dozens of pirouettes and jumps higher and higher every day, this “Artistry” is what differentiates dancers from real artists. This “icing on the cake” makes all the difference. 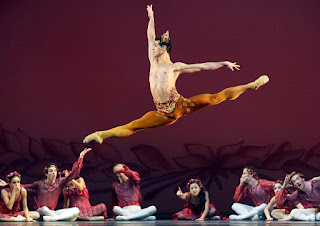 “Autumn”, the “grand Finale” for this Ballet that I consider more a kind of “Divertissement”. A piece of bravura and a perfect vehicle for such “virtuosi” as Liudmilla Konovalova, Denys Cherevychko and Davide Dato. All three brought down the House, had the biggest ovations of the evening and had numerous curtain calls. Mr. Dato was fascinating and humorous as the “faun” – jumping better than ever. 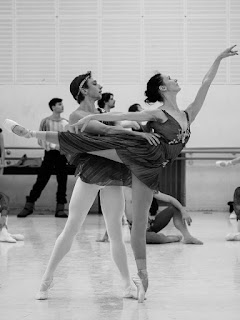 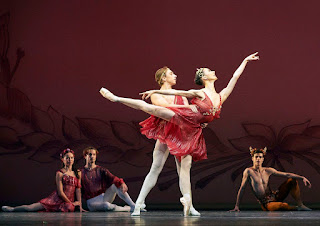 Denys Cherevychko literally “stopped the show” with his “Tours à la seconde” but it must be said that he, in comparison to many brilliant “Virtuosi”, that shine on their own because of the total technical command they posess, is NOT an egoistical and egocentric dancer. He takes intense care of his partner. Miss Konovalova seemed to be having fun during her variations. Quick, fleet-footed, owner of an unshakable axis, she makes everything seem so simple.

Fact is: “The four seasons” is not a typical Robbin’s work for me. Perhaps, at the end of his career “new ideas” were not being born anymore… and he relied in an elder language than his own... It has that kind of “circus atmosphere” that is so much appreciated by audiences that do not understand much about Ballet and insist to applaud during Codas. Another thing that I intensely dislike.

Even so, the evening presented a nice combination of three very different pieces. Another good, interesting programme conception of Manuel Legris’ era. And we must thank him for that.

Thank you my dear Ricardo!!!! Xxxxxxxxx

Thank YOU, girls for such a beautiful performance!

Danke mein lieber. Always nice to read stuff from people with knowledge. Lovely to see you too last night, sorry I didn't really get to talk to you. I left early, I wasn't in the mood for party. See you soon! Jaimy

Happy to be helpful!

Definitely, Mike. Sorry but I do not like that!

Thank you Ricardo!It was nice to see you too:-)