Not an easy task to tell Olga Spessivtseva’s „story“. Not even to suggest it.

Choreographed in 1997 this intelligent work is not concerned with simple “story telling” - especially because of the many divergences in her biographies - it goes much further... 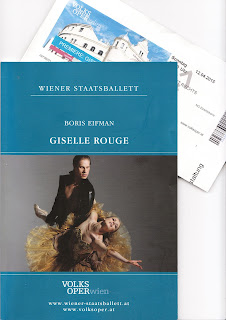 Boris Eifmann used an extreme creativity to surpass a classic plot and suggest emotions, life aspects and events in a much more dramatic and effective way.
Ignoring the conventional line development of a “theatre plot” (that in fact has not much to do with the “dance idiom”) he hints lightly at facts and evokes general feelings that cannot be placed on an exact time or room or country, but which were part and nearly a kind of “condicio sinequanon” of Spessivtseva’s mental instability.

Not to be really compared with his “Anna Karenina”, which conceals a much more conventional “script line”, his “Giselle rouge” fascinates more because of its very openly aggressiveness, madness, nervousness and also because of the fact that its language is freed from the burdens and obligations that classic “story-telling” brings along with it.

I am sure that this is the reason why its language is so much more fascinating and appeals so much more to Ballet-goers. This is ballet. 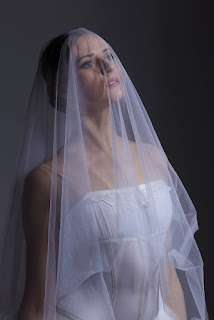 Eifman, as I read quite recently, was described as a “philosopher choreographer”. And I could not have agreed more with this description.
He is so deeply absorved by and concerned with the secrets of the creative process and how very difficult these may be.
He reveals little – but very directly – to his audiences, making them a part of the ballet.
He “discusses” with Ballet-goers about complicated, dramatic aspects of life.
And all this without fear and never going too far. He defined his own genre as “psychological ballet”. And once more I could not have agreed more.

It was a pleasure and an honour for me to observe him from so nearly during the party after the Première. 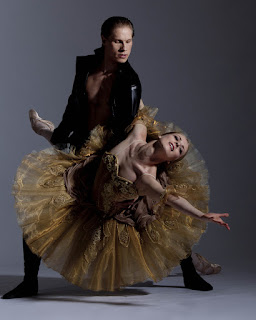 Even though I was judging this work as too “highbrow” to the customary, average Volksoper-audiences it did not surprise me a bit to witness such strong applause at the end of the evening.

I was just sort of speechless with the unjustified applause at the end of a “Charleston” (“Yes, Sir, that’s my baby” to be more precise), a popular piece that reminded me of the very strange Bolshoi “odes” to America at the beginning of the 80’s, which I had the chance to witness here in 1982. 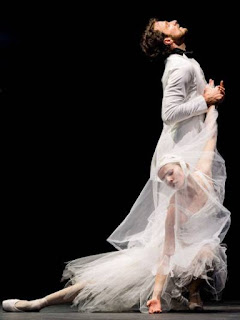 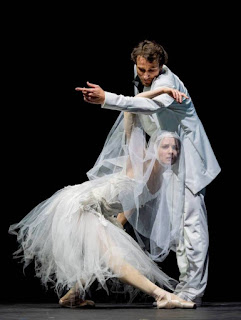 That was the only time in which the audience betrayed itself – not just by applauding a very popular “hit” but also for giving itself away revealing such lack of “connoisseurship” to the rest of the score – marvelously put together by the way, especially the use of different Alfred Schnittke’s pieces at the “mad scene” in which Olga really lost her mind (was it in Australia? Some speak of the States) not knowing anymore what she was dancing, improvising, forgetting where she was or which Ballet she was in… 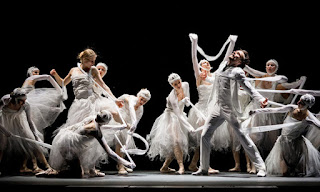 Roman Lazik did a good job as "the partner" - supposedly Serge Lifar. It cannot be said that Olga really had this "flirt" with Serge. But the general idea of her having an unhappy love affair could also be another "help" for her descent into hell, into madness. Another "hint". And a very good one indeed. In very good shape Mr. Lazik is a very correct and competent dancer that seems to have a following in Vienna.

Jacopo Tissi, as “the partner’s friend” (Serge Lifar's "lover"), showed a beautiful stage presence. Very clean features, long legs, a beautiful line and a precise certainty in his technique - and by the way, giving his solo debut on stage. A matter, a date of rare importance in a dancer's life. If he was nervous, the audience could neither feel or see it.
A very gifted young dancer that will definitely have a bright future.
I am quite sure that we will stil much from him!

Kirill Kourlaev filled the stage with strength. Looking very “pump” (a fact that was strongly accentuated by his low cut costume) he developed his character, the “Bolshevik” into a very threatening, menacing kind of man. Dangerous. Great work. In full command of the much needed stamina that this role requires he turned his relationship with Olga into a play of cards that very aggressively comes to an end. A very scary aspect of life: The dependance of one person while being dominated by another.
What is the reason? Love, sex, possessiveness, politics, craziness, instability or simply “power”? Whatever the answer may be Mr. Kourlaev showed us this nearly vicious kaleidoscope of feelings – and the amazing thing is: a dancer that is also a comic, a prince, a romatic partner, an angel, a Matador… I love versatility and Mr. Kourlaev is always surprising us. 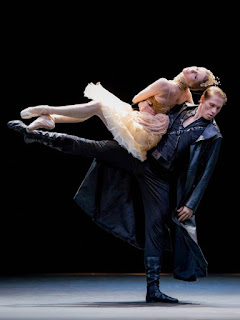 Eno Peçi as the Balletmaster brought down the house and made us nearly cry with his unfortunate destiny. So sad all that vulnerability. Mr. Peçi, another very strong dancer, in full command of his trade, of his intellect and of his art, has reached that beautiful moment in the life of a dancer which combines the total confidence of a strong technique in a young body and that certain thing called maturity with its many aspects that make all the difference between giving just a good performance or giving a performance that touches us, our hearts because of its artistry. Chapeau! 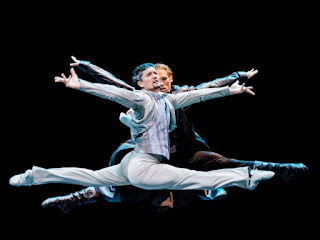 Olga Esina was the biggest revelation of the evening. Never before had I seen Miss Esina in such an emotional, fragile, daring performance. Yes, daring, you read it right: Spessivtseva’s character is no bowl of cherries to perform. Her contradictions may make her even unsympathetic, generally. Miss Esina, another dancer known to all of us also because of her exquisite technique, beautiful and intelligent musical phrasing and poise as well as clean lines that are mixed with the best of classic proportions, surprised us all as the “Olga that went mad”. Even if sometimes the choreography is far from “becoming”, forcing her into even inelegant movements, poses. And she did it. Courageously. The kind of interpretation of the first magnitude, the kind you do not see frequently. 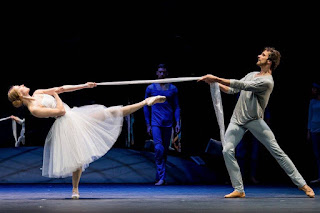 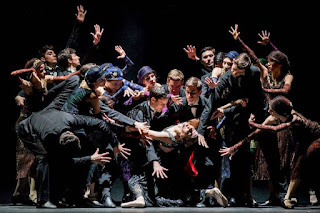 Cutting it short: a most enjoyable evening that was carefully rehearsed – and when I speak of “carefully” I mean “with great care”. For details, for effects, for emotions. Everything single element carefully thought of, "round".
Bravo, Monsieur Legris for once more presenting the Viennese Audiences with a ballet that could be called “un objet d’art” of the finest bone china.


Thank you very much!

Ricardo,you wrote that the dancer is "competent"(bitch!)but i have to say it: you are so well dammend competent in your work(there's the huge difference about being a competent dancer and then a competent writer - both meanings just don't say the same).i love your work,dear and i am always so glad to witness other interpretations here.your gigt is that you make people think.does anyone make YOU thing?love,always Mike

Just to let you know: on line (der neue Merker) since yesterday...

Bravo Manuel Legris, bravo Jacopo and all my friends (too many to name individually) in Wiener Staatsballett! Grazie, Ricardo Leitner!

Hi Ricardo!
I wanted to reply to the article yesterday, but it was crazy with this Giselle Rouge trailer...
Great article, I like that you mention the different story-telling from Eifman.
It's a unique piece.

Thanks for including my trailer!

Alexis Forabosco liked this (the new video) on Facebook.

Rick,this new added video is something.really awesome.great work of camera for ballet.I am more than speechless (like you wrote about the audience's applause after the silly charleston).tks Mike