Balázs Delbo's’s work on film has been fascinating me since quite a long time. For someone who understands ballet and dance as a “language” it is easy to understand why. For someone who is not quite “in touch” with those forms of art, it may take a little longer to be able to articulate one’s feelings about it. But the fascination never diminishes. To be very honest, I do believe that his work, so special, deserves the adjective “exquisite” – but what else to expect from an open-mind that, uncommonly to most dancers, love other art forms and enjoy, for example, Elvis, Woody Allen, Jazz, Billie Holiday, Norah Jones and films of Clint Eastwood just to name a few? Not forgetting the fact about his hard work and strong auto didatic ways.

But, in order to give this “portrait” a touch of cinema, let’s start it as a script.

Time: Friday, February 27th, 6:30 pm
Place: «Café Westend», an old-fashioned Viennese Café which seems still to hide the ghosts of many generations that were either departing from or just arriving at the “West-Bahnhof”. Vienna.
It is loud, the piano-player is trying to be heard and is playing also very loudly.
Mr. Delbó arrives. 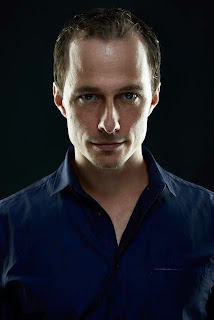 Looking at him quite quickly, one “sees” his full awareness of the room, its location, its form, its noise, its single details… he greets me, sits down and then, turning to me, makes me feel that I had, in spite of his full awareness to the surroundings, all of his attention and concentration, much to the contrary of superficial and unconcentrated “interview subjects”.
He had “arrived”. Our talk starts.

. Before we start talking about the movie-maker, let’s start, as the song says “at the very beginning, a very good place to start… tell me about the dancer Balázs Delbó…

“I was quite a late bloomer… you see, my parents were dancers and always when asked if I wanted to follow into their steps, I gave a strict “no” as an answer. After a summer-camp, in which my mother was teaching, I got in touch with young pupils my age and all of a sudden I decided to dance. My mother said “but now it is too late”. You see, I was already 14 years old… Hard work pays and four years later, quite unusually for such a short period of training, I was admitted into the Opera House in Budapest”

. I remember quite well watching an Opera Ball in Vienna and witnessing your entrance as “Mozart” – how did that feel like?

“Yes, I was already dancing at the Viennese Opera, and to be quite honest. It felt scary… you see, the quick running down the stairs, 7000 people in the Opera watching you, many more in front of the TV… I just thought: “don’t slip, whatever happens, just don’t slip”

. And then after some years you stopped dancing, put your slippers away and finished your career as dancer… what happened?

“ I had had an injury which, with the passing of the years, became very bad and then worse… It led me to a difficult situation in which I had to make a choice and perhaps to the most difficult day of my life: you see, I had made up my mind, then I went to the Opera to quit my job, my career, my world. I entered the Opera, the biggest and most important “Theatre” in Austria, a soloist and Ileft it as a nobody, a foreign jobless nobody… all this within some hours… “ 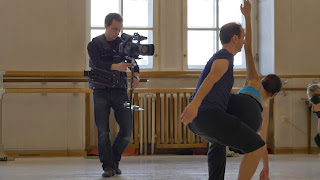 . Yours are the most sensitive films about ballet that I had ever watched – of course we do have lots to thank due to the fact that you are a dancer but it is more than that. How do YOU feel about that?

“Knowing my way around a ballet is a tool that I would not like to miss. But you are right… it is more than that. When I started filming, I wanted do develop a new language… I started thinking “let’s make trailers” – have you ever noticed how sometimes trailers of American movies can be even better than the film itself? - yes, trailers and not “extremely short pieces of ballet… I love, most of all, to “tell stories”. Also when they are very condensed, they must fit into the times in which they are being told. Time, technique, countries, feelings change. My way of “story-telling” will be preserved forever, as long as the film exists. I love eyes, close-ups, emotions being shown… And they are there on my films, developing a new language for dancing films – bringing the audience much closer to the dancers, bringing the magic of the piece much closer to the audience… This is film. If I want to watch the performance from far away, the classical way, I can always sit in a Theatre“ 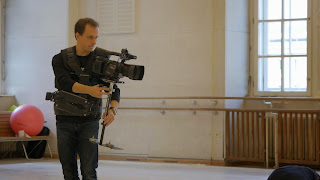 . But this is exactly point that I miss, worldwide, today, Feelings: There seems to exist a cult to technique in which dancers forget that technique by itself is just a tool to achieve artistry… and their artistry includes also the comprehension of the character they are playing and its feelings… a fact that has been neglected many times during the last years, also here in Vienna...

Balázs Delbó gives a short sight and his eyes become gloomy, his usual electricity while talking seems to leave him for a while – all of a sudden the sounds of his brain “machinery” silence - it seems he has either heard this affirmation or thought about it often. He says simply 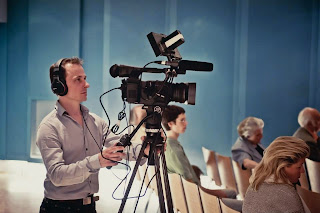 . Your very specific camera angles show more of the movie making mind than of the dancer. Was Cinema always a passion?

“ Yes, and I want to catch people everywhere – and you can do that nowadays. At home, on the bus, on the tram, in the Underground. But you have to adapt your language to these “other” mediums. You cannot, that is definite, work the same way as if you were making a statement in the classic sense of a film that is being shown in a Cinema House. But you have to feel it. There is no recipe, “formula” with the right ingredients to make the “perfect Movie”, to tell the story “right”. You have to feel it. This applies also to script-writing. You can make courses, learn the “dos and don’ts” but at the every end it is up to you… the concept of the right “timing” (in full accordance to your own story-telling) is inside you, nowhere else. 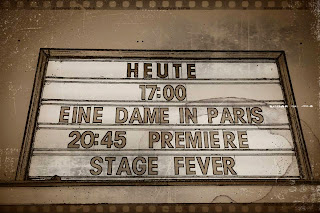 . What about “Stage Fever”? I was lucky enough two watch two “previews”. But since then we have not heard about the movie… when is it to be in a cormecial circuit?

“There are still some copyright questions – music, choreography etc. – to be clarified but I hope that the audiences will be soon able to enjoy it!”

. I do hope so. It is an incredible testimony to the “Legris era” as well as to the many marvellous talents that are now on the company. By the way, “Live Stream” at the Opera – a huge project I guess…

“You can say that. It was quite exhausting but the results made us so happy that they were worth it. By the way I am not only responsible for the ballet live streams as a director but also for the break Spots during Opera performances.

. Tell me more about your “visions” for the future.

“ I want to bring the audiences more and more into the stage – yes, into it – until one day they’ll finally enjoy the ballet not from “the front” or “backstage” but being in it, as if they were a part of it… but that is really another Story!

. I want to thank you, Balázs Delbó, for this informal chat and leave you here with the previews of "Stage Fever" - the documentary about a mark in Vienna's Ballet history: Manuel Legris' footmarks here in Austria.


Stage Fever - TRAILER 1 - on stage Videos from DelbeauFilm on Vimeo.

Stage Fever – TRAILER 2 - On stage videos from DelbeauFilm on Vimeo.

Stage Fever - Explosion - On stage videos from DelbeauFilm on Vimeo.

Haha I don't think there's a bigger thumbs up than Dima's...

You made this short talk an extraordinary very sensitive story, which I love from the beginning till the end. You listen really carefully and could remeber some details of my reactions! Unbelievable! It's really amazing and I am very thankful.