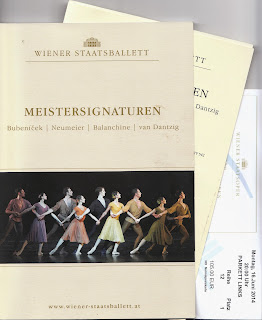 Here just a few words and thoughts to yesterday’s performance at the Opera.

- Le Souffle de L’esprit (Master: Jiri Bubenicek): the use of Bach’s music is one that gives the challenging choreography a sort of musicality (in its movements) that is very singular, very pleasant. Soloists and Corps de Ballet were in very good shape and precisely rehearsed. Denys Cherevychko was a bit uneasy and his movements did not flow naturally, as if he was having a sort of problem in translating Bubenicek’s language to his own body. I was wondering why; he has been dancing this piece since 2011... But any normal person may have a bad day, isn't it?
On the other hand, one of the most pleasant moments of the evening belonged to Dumitru Taran. Mr. Taran completely in his element. He absorbed the choreography in such a way that its “language” was completely natural to him, nearly becoming his own! Using an expression that used to be common in Portuguese in my youth: “Parecia que havia bebido azeite” (“It seemed that he had drunk oil” meaning the his movements were smooth, his flexibility immense, that he was "at home" doing what he was doing). Mr.Taran’s dance is an intelligent one. I like that!

- Vaslaw (Master: John Neumeier): there are many different opinions about this work – many consider it boring, updated... I personally like it very much because of its great insight, its small details, its “mood”.
Mayasu Kimoto with his great stage presence, showed us once more his precise technique and appeal to the audience!
Also once more Dumitru Taran gave us a beautiful performance – in fact nearly without time to change between “Souffle” and “Vaslaw”.
Greig Matthews did his best out of a very ungrateful solo: very challenging and without that “certain” effect which keeps audiences concentrated. I wonder why Mr. Matthews is always getting such parts – like for example the prince’s solo on “Sleeping Beauty” (also another very difficult, ungrateful, impactless dance).
Ketevan Papava and Robert Gabdullin on top form! (I liked very much to hear, from a colleague of Miss Pavava, a refference made to her: “She is an artist”. And this articulated with great respect!)

- Alegro Brillante (Master: Balanchine): what a pleasure to watch Liudmila Konovalova in such a night like this. Precise, brilliant, musical, daring, effortless and so much in the Balanchine mood and style…
Robert Gabdulin, an attentive partner, also at ease with Mr. B’s vocabulary.
Natascha Mair and specially Suzan Oppermann (with Marat Davletshin) were “shining” on stage.

- Vier letzte Lieder (Master: Rudi van Dantzig): Just the presence of the sopran Olga Bezmertna on stage was reason enough to relax, “put your feet up” and enjoy this marvelous piece.
Kyoka Hashimoto/Mihail Sosnovschi, Ioanna Avraam/Mayasu Kimoto, Ketevan Papava/Kirill Kourlaev gave emotional performances.
The only uneven couple was Alice Firenze and Roman Lazik:
She, a real joy to watch in her vital, sensitive, substantial, strong performance and lovely, clean technique. He, (again) making suffering faces all the time (a very boring and very old-fashioned tendency - to turn dancing into suffer - that I had't experienced anymore in years) and very strangely made up. His Make-up was so "white" that it made his eyes "disappear". Normally Mr. Lazik is not an ugly man.

Perhaps the audience still remembered Shane Wuerthner in the “solo” role - the Angel of Death - and how he made it his own (he is still pictured on the programme’s cover).
Even so Eno Peci gave a fine performance because of the impact of his very strong stage presence that obviously appeal to many ballet-goers.

Not trying to quote the Marx Brother’s film, I must say:
One NIGHT at the Opera – another fine present for us from the “Legris’ era”!
It is GOOD to be an eye witness of all this...