Jewels of the New World... The Season is over... Some Thoughts by Ricardo Leitner

The last ballet season and the direction of Manuel Legris at the Vienna State Opera has brought us many delights…
Here some thoughts…
It may seem rather unusual for the Tertúlias’ readers that I’ll not point out some of the Ballets and “popular” dancers that, during the last months have been quite present at the Austrian “media” – if you choose to refer to what’s done in this country by this name - either in newspapers or on TV. 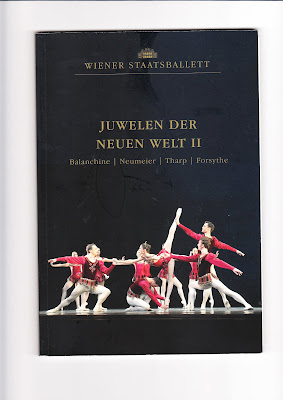 Unfortunately I don’t seem to share the tastes of Vienna’s broad audience – I still much prefer dancers that spend more time rehearsing than being at the jury of some strange TV programme or the ones that chose to "give" more on stage and, like this, winning the audience’s affections than the ones that this year were trying at all cost to be interviewed during the Viennese Opera Ball and were snubbed (or in fact ignored?) by the interviewer…

Some of the Highlights of the past season for me were definitely Serge Lifar’s 1943 Masterpiece “Suite en Blanc” and Boris Eifman’s “Anna Karenina”. Unfortunately I missed Vladirmir Shishov as Basil in “Don Quixote” (Don Q.). But I saw him as Florismund in “The sleeping Beauty”.
I have to point out Shane A.Wuerthner’s beautiful Performance in “Suite” (bellow in a picture from “Die Kronen Zeitung”) 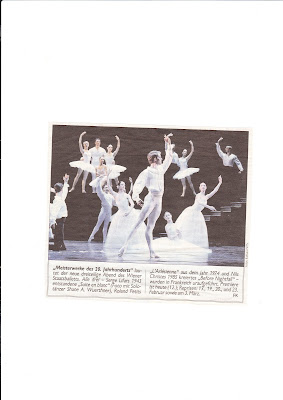 and Dagmar Kronberger’s valuable, delicate insight of the role and I am not referring just to technique. Dagmar Kronberger’s Anna is a woman of flesh and blood. A beautiful vulnerable woman looking for happiness – even it means the pain of leaving back one’s own child. Just a mother can understand that. A great, sensitive performance by a beautiful dancer (Bellow on the right in a picture from “Die Kronenzeitung”). 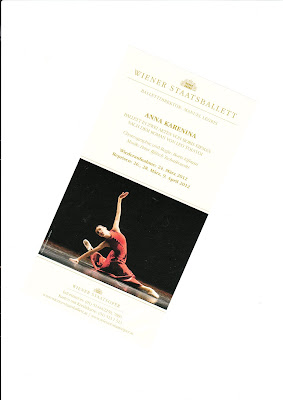 Later in the season I had the chance and privilege to present Dagmar with a DVD of Vivien Leigh’s “Anna” – the british film that was once called “a beautiful disaster”! Not at all like Dagmar’s “Anna” here: a beautiful success!!!!

I was lucky enough to be able to attend to three performances of “Juwelen der neuen Welt II” (Jewels of the New World II, an allusion to Balanchine’s Ballet “Jewels” which include “Rubies”, “Emeralds” and “Diamonds”) which included choreographies by William Forsythe, John Neumeier, Twyla Tharp and Balanchine (Mr. B.).

As mentioned here, quite a while ago (precisely on March 20th) in a review called “Wiener Staatsoper: Balanchine and Robbins (and the Manuel Legris’ adorable arrogance)” I do really admire Manuel Legri’s arrogance in putting such ballets in the repertoire here, some of them that even the ABT wouldn’t dare to use – as they do really require a certain understanding (I am thinking especially about Mr.B.) that is very difficult to attain, especially if you were trained in the East! Bravo, Dancers of Wiener Staatsballet! Well done! 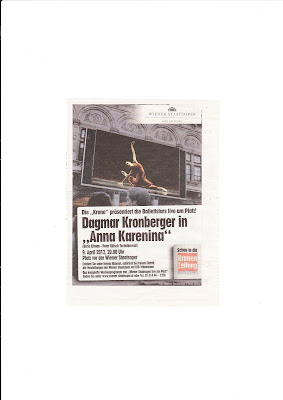 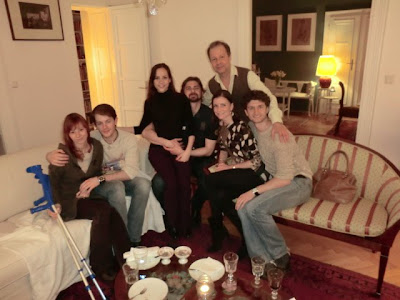 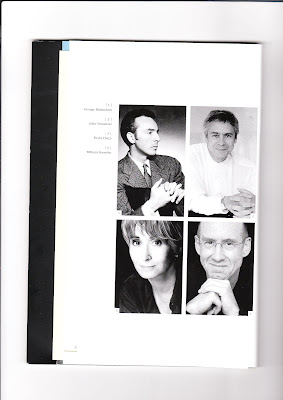 
“The Vertiginous Thrill of exactitude” by William Forsythe is not one of my favourites but I must say that I enjoyed very much Irina Tsymbal’s and Nina Polakova’s performances on June 17th but sort of missed the presence of Denys Cherevychko… He had been brilliant on April 12’s Performance… He appointed a Principal yesterday! My Congratulations, Denys! 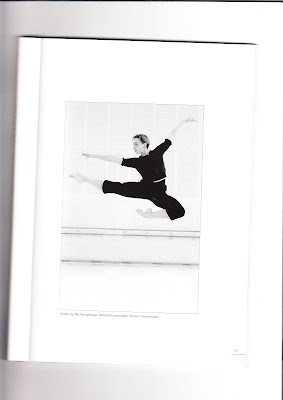 “Bach Suite III”: a very special Ballet from John Neumeier.
I still remember every single movement from Roman Lazik and Maria Yakovleva back in April. Pure poetry. A delight. Roman Lazik is blessed with a beautiful, sensitive stage presence that, combined with his clean technique and good-looks, turns him into a very special Dancer. One that irradiates intelligence. Miss Yakovleva is also very much of an actress-dancer and… I like that.
June’s performance was a good and an extremely correct one. Olga Esina is always a very self-confident dancer with great technique. Kirill Kourlaev is a very good, correct dancer even tough I think that his severe “Shelleyan- features” (Mary Shelley, English novelist, 1797-1851) and height are a bit of a disturbance, in my opinion.

Greig Matthews’ presence in “Bach Suite” was not a very big one but I am sure the the Ballet followers realize how hard this talented young man has been working. Every time that I see him again on stage he seems to be getting better and better – and he just turned 19!!!!!

Mihail Sosnovschi, was the second lead in April’s Performance – and a very, very gifted one. I love Sosnovschi’s “aura” on stage and the audiences seem to be carrying a “love affair” with him since a long time… 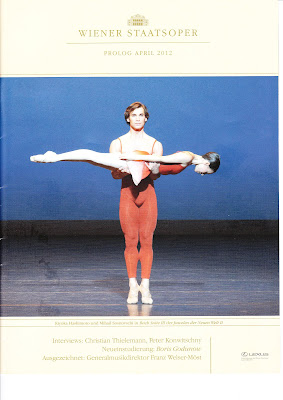 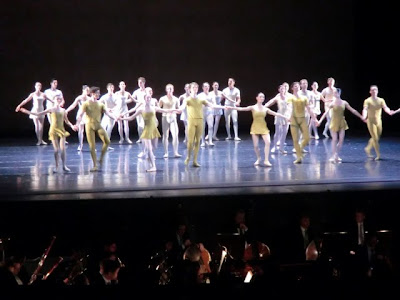 “Variations over a Haydn’s Theme” (Twyla Tharp) turned to be the biggest disappointment for me in all three Performances. A bore really. I guess that it has been misunderstood by everyone who’s been staging it – or rehearsing it, better said. The choreography itself is not one of Twyla’s Masterpieces (and I DO love Twyla’s work) but it has “humour”, a certain “freshness” in it (Think of all never-ending “exits” and how exaggerated they are… ) but no one here seemed to have remembered that while rehearsing it. Soomething tells me that Shane A.Wuerthner knows that). It is being danced “straight” and turns quite quickly into a big bore.
Such a shame to see such talent like Shane A. Wuerthner’s, Eno Peçi’s and Vladimir Shishov’s wasted like that. I guess the audience would have expected to see more of these three gifted, brilliant dancers during both last performances of this programme!

But even being a frequent Opera-goer it is quite difficult, after a whole year, to really evaluate all that one has seen during the past 10 months…
So many things are forgotten because they didn’t really leave a lasting impression in one’s mind. Sometimes not only because one hasn’t liked them or because they were not good – it all has also a lot to do with with your well-being and how open and relaxed you were during a certain performance, at that particular moment to really “absorb” what you were watching… Yes…

“Rubies”: Davide Dato and Natalie Kusch simply “brought the house down”. A delicious way to finish this function… Dato’s jumps and exactitude, his stage presence, his classic features, his very good physique don’t let the audience stop following him - even tough I don’t think that the white tights suit him as well as black ones – like the ones he was wearing in the “Junge Talente” Gala (My “critic” here from May 31st).

Anyways, Davide is a promising, bright, young new Star of the State Opera and we’ll surely hear a lot of him during the next years! 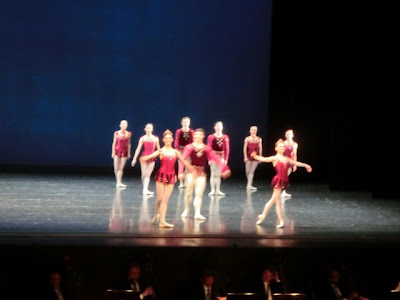 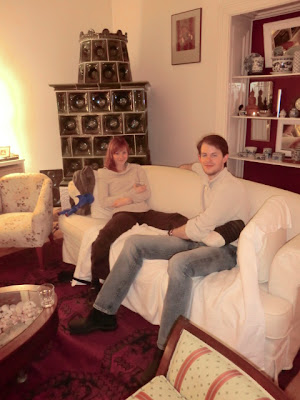 The Season came to an End – in a way, with aa sad note for Vienna’s audiences: two of the most gifted dancer’s of the company are leaving to San Francisco: Shane A.Wuerthner and the lovely Marie Claire D’Lyse. I may, also in name of your very many followers, wish you all the luck in the world for your future! God Bless and thanks for all the joy you’ve given us during the last years! And Thanks: it was really nice having you two over for dinner! The next prawns, please in San Francisco!

But to complete these thoughts about the Ballet and Vienna, here some news – and surely a very well-deserved one:

You remember the dancer I have been writing about, the Scottish dancer called Greig Matthews? Well, just after yesterday’s performance (A Nureyev Gala) he was appointed demi-soloist!!!! Haven’t I said so? He just called to tell me that! I am so glad for his promotion, really glad (and also very happy that he called me personally to tell me that! I felt like “part of the family”. I well imagine how proud his Mom might be!). 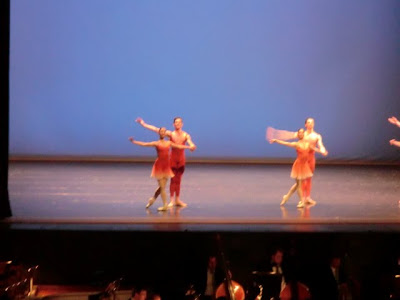 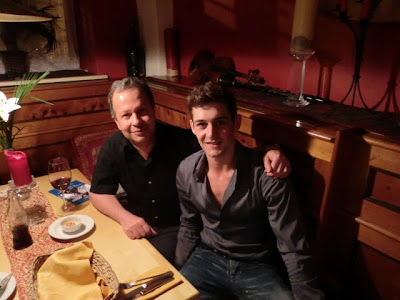 Congratulations, my dear Greig!
These news surely finished the Season in grand style!
You deserved that!
Let’s celebrate!!!!!