To be very honest I was sort of skeptical about visiting a performance of „Spartacus“(a ballet 100% associated with the Russian culture and a very peculiar feeling for aesthetics ) at the Bayerische Oper in Munich… but I could not have been more delighted after watching it! 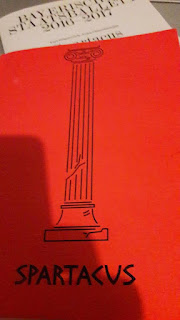 I arrived a bit earlier than I wanted and had the time to visit the Opera.
Such a difference from Vienna: 95% Germans in comparison to the many tourists that visit the Opera in Vienna. I liked that!

I had a lovely seat on the 10th row and then remembered that there is no central aisle (I had not been there for a long time) – a fact of which I am not fond of… you see, I suffer a bit from claustrophobia and “to know” that I can get out from anywhere quite quickly is ALWAYS important for me.
The performance started.

With the exception of the “schmaltzy” pas de deux in the second act, which was used on Britain’s TV series “The Onedin line” in the 70’s and became a “no go” for me, I love Khachaturian’s music!

It was masterly conducted by Karen Durgaryan (like Khachaturian also an Armenian) and the first notes drove me back to Vienna 1982, the last time I had seen this work with Vasiliev and Bessmertnova, while I recalled that this was “just” 35 years ago. 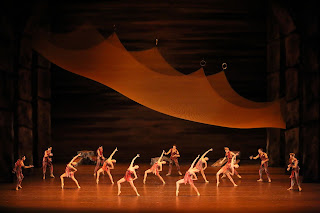 The girls in the corps-de-ballet impressed me in a certain way. Not very homogenous in looks, height and style but very strong technically – and with lots of stage presence.

Unfortunately I cannot say the same for the boys. Somehow I had the feeling that they were still in need of more rehearsal and more vitamin injections to play these roles more strongly: heads, arms, leg’s elevations and even musicality… all a bit uncoordinated, and definitely not exact.
But there is potential there, within this group of young men.
One dancer impressed me, a very gifted young Italian man called Stefano Maggiolo. I would like to see more of him on stage in the future. 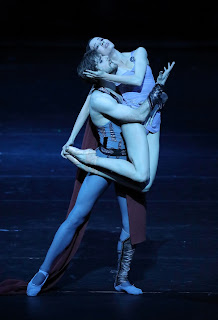 Vladimir Shklyavov was a great Spartacus. Of course one cannot make comparisons to “both” Vasilievs in this role – which requires unbelievable precision, stamina and, pardon me the expression, the strength of a horse. Mr. Shklyarov, a strong dancer, had the audience all the time “under control”. A very sensible dancer and an actor. 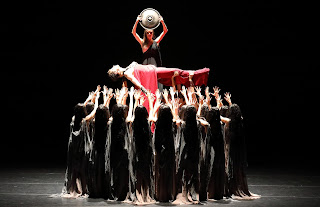 His wife, Maria Shirinkina, played the role of Phrygia, a role that is, quite honestly, dramatically and choreographically much inferior to Aegina’s. But she was in control of it. Correct. I like when, nowadays, dancers do not use any kind of over extension as Miss Shirinkina, a dancer with a beautiful, clean technique, never does. Unfortunately the hairdo of Phrygia (and the other “slave” girls) is something that should have been changed since decades… I have been saying this for years!
It still reminds me of “Bond Street” in the "swinging sixties" – which may have been surely considered very “daring” in 1968's Russia and in Grigorovich’s choreopgraphy…. 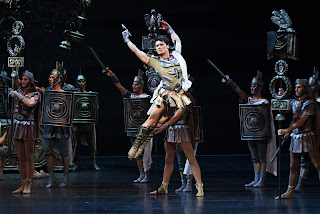 Erik Murzagaliev gave us a great, strong Crassus: a wonderful and very sensual dancer in full control of the role (and with a very clever hairdo that made me think of British actor Nicholas Clay in “The Martyrdom of St. Sebastian”) he played this half part of the couple that opposes Spartacus and Phrygia, with a certainness that is very rare on stage, especially on dancers that are so young. But I must say that his stamina left him a bit during the third act. I found out lately that Mr. Murzagaliev took the role of Crassus a while ago – his picture is not even printed in the program.
I think that Mr. Murzagaliev is a dancer from whom we might hear a lot of in the near future. 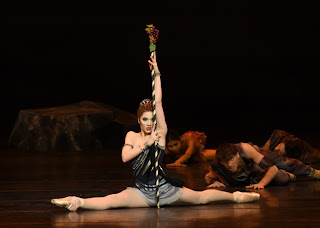 The Star of the night was Prisca Zeisel. And the audience also thought so (Well, Miss Shirinkina had the first bow, Miss Zeisel the second... that showed the audience how much more important her performance was...). She gave us a wonderful portrait of Aegina. All the very direct ways and reasons of this quite complicated (not only emotionally but also technically) character were given to us on a “silver plate”. Miss Zeisel and her eyes “that tell us much more than she wants to reveal” (like Bette Davis’) was turned into a mad courtesan, possessed by power, lust and the flesh. This is for me the most difficult role of the show – emotionally and technically…

I won't go into pirouettes, jumps, details... she has it all... just the tool for her arstistry...

Prisca Zeisel has turned into another “persona” on stage - and that is the important point about this very young lady– dominating it, in full command of a beautiful technique and chemistry, being in full charge of her role and controlling the audience.
Giving us just what she wanted to give us "right now", playing with artistry, nearly flirting with us.
Just that.
Just simple as that.
That "simple thing" that Jane Fonda once reffered to as "to make love to the audience".
But you have to be a talent to do “just that”!
Her eye contact with the public has much to do with it.
Enchanting.

By the way, Miss Zeisel was promoted to the rank of first soloists.
This is what I call a very well-deserved promotion!

Yes, I was very skeptical about this performance. But it was wonderful!
For me a production that is highly recommended!

I am glad you have enjoyed the show. Thank you for the kind review, and keep up the good work with your blog! :)