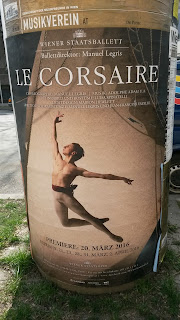 In contrary to a lady sitting next to me that has started making her notes at the middle of the third act, I have to go back a little in time in order to write not only about the dancers and the choreography but also about the production, the intellectual process and its “coming into life”.

As I have often commented, I like to arrive earlier at premières, as if "soaking" more of the atmosphere would underline more and more the excitement of a discovery, of witnessing something new. Premières are very special evenings, with lots of expectation in the air.

As a kind of “hobby” I like to analyze faces of certain members of the audience before, during and after the show... huge transformations can take place and be seen - depending on the grade of interested that a performance "exhales" and on the individual interest of many.
Extremely interesting. 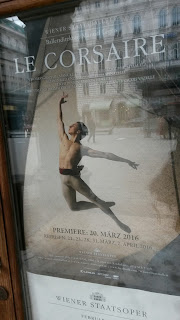 The audience was full - full and filled with many "names" of the international dance panorama – especially from the Paris Opera - as well as ballet critics.

Some few weeks ago during an official "talk" at the Opera, Monsieur Legris told me personally:
"We are on the right way" - how right he was!
The challenge that Manuel Legris took is a fascinating one. A very honest one. Chapeau.

"Le Corsaire" was not in the repertoire of the Paris Opera, so in this case, as Monsieur Legris put it well, there were no possibilities of influences, just his plain understanding about the work and its complicated, very peculiar dynamic. Also his understanding about the characters should not be forgotten. The characters that we have witnessed yesterday on stage were far away of being just statues in a wax museum but characters with an own drive.
On the top of it all, I have to draw your attention to the point that, “Le Corsaire” is in itself an enormous challenge.
Its story telling-line is a very old-fashioned one, quite difficult to adapt to our present times. Also its constant use of pantomime presents another challenge – not only to dancers but also to the audiences (which are not used anymore to this kind of language). It is, as a full-evening ballet, a very complex piece of work and this regardless of the fact that the main line of the story is difficult to understand, even remember... I have rarely found someone who could "tell the story" of "Le Corsaire" without consulting either the libretto or some other sources of literature about it (or even without contradicting oneself).

Special mention should be made about Albert Mirzoyan, as assistant choreographer. As Mr. Legris put into words: “We are a good combination, the French and the Russian souls”. Mr. Mirzoyan is that kind of gentle character that exhales knowledge about ballet, art, history and is always in full-command of what he is doing. And this "at ease".
Such a blessing for our State Opera and for Mr. Legris to have such a gifted person, such an erudite, among his few co-workers. His work is not only of extreme importance for us but also to the Ballet world. As we have witnessed yesterday.

Lots of praise no Mr. Igor Zapravdin, responsible for the musical arrangements and his brilliant use of music from “L’Écumeur de mer” (also Adam) for the Odalisques and Slave Dances. Merely this distinctiveness turns this production into a “unique” one – without the confusing use of music from up to 11 different composers (like in many other productions), concentrating on Adam’s work – which in the case of “Le Corsaire” is not so brilliant as his “Giselle” but surely much more consistent when treated not so eclectically.

Luisa Spinatelli’s décor and costumes are a beautiful work of art and delicacy – with the only exception of the girl’s flowery headdresses during “Le jardin animé” that, from a certain distance, give more the impression of being hair-curlers than roses – a fact that was confirmed to me by an Stylist friend - especially on blonde dancers like Eszter Ledán or Suzan Oppermann.

Valery Ovsianikov’s conduction was at few times quite irregular. The tempo was either too fast (as during some fouettès that tossed Maria Jakovleva completely out of music) or too a bit too slowly (during a part of Miss Konovalova’s variation in the third act). But still, a brilliant Ballet conductor.

The following performances should be highlighted:

The Waltz on the third act was brilliantly performed by Oxana Kiyanenko, Eszter Ledán, Anita Manolova and Laura Nistor. An interesting, very lively piece of choreography that was beautifully executed by the four of them. 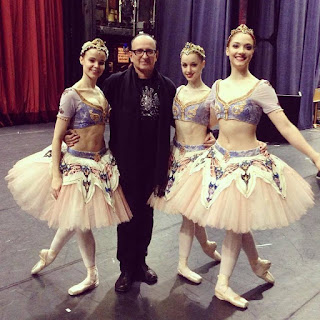 The three Odalisks danced by Natascha Mair, Nina Tonoli and Prisca Zeisel were a simple masterpiece of precision and joy. Three very gifted dancers, splendidly “on style” (as they have proved many times before) in perfect “unison” with each other. Not only a question of talent but also of emotional intelligence. Three dancers that really made their “homework”, thinking about the characters, adjusting to each other, talking about what they were doing. I like that. Congratulations to these exceptional talents. 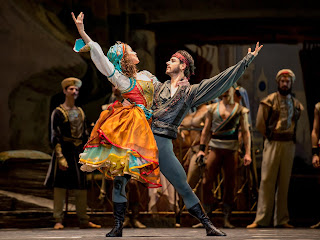 Davide Dato and Alice Firenze were at their element as Birbanto and Zulméa: motion and fire. Every time they came on stage you had that certain (very well known) feeling of a “show-stopper”. And stop the show they really did. 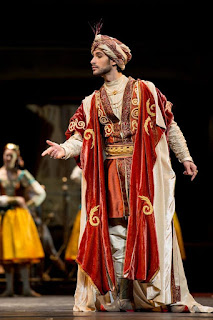 Mihail Sosnovschi’s Seyd Pasha (another innovation by Mr. Legris that instead of having a laughable character as the Pascha decided for the more logical choice of a good looking man) left no impression. This non-dancing role is not quite adequate for Mr.Sosnovschi. His pantomime is too subtle, too understated, too “small” for that huge stage. He seemed bored. And this is quite unusual with Mr. Sosnovschi. 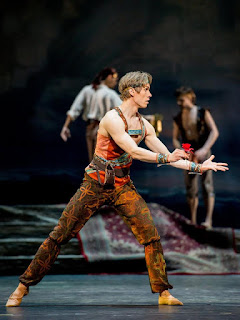 On the other hand Lanquedem, as danced by Kirill Kourlaev, is a character to remember: Mr. Kourlaev’s total command of the stage, his beautiful technique (and of a very good pantomime) just made us sit back, relax and “put our feet up” to enjoy a performance without any fears that the dancer might not “make it”. A pleasure for everyone present. Vitality at its best. A danseur. 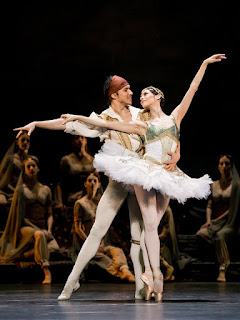 Unfortunately there was no chemistry between Robert Gabdullin and Maria Yakovleva.
I simply could not “buy it”, not believe the love story that was supposed to go on between the two of them onstage.
Mr. Gabdullin, an extremely gifted dancer with a very clean technique and beautiful lines, gave us a beautiful, daring and corageous Conrad. In every sense.
His special temperament and dramatization of the character were well idealized.
But there was no response from Médora, who seemed to be dancing alone and for herself: sometimes even giving the impression of walking “through”, allowing once in a while Conrad to touch her, support her.
I am looking forward to Mr. Gabdulli’s future.
Miss Yakovleva was correct as Médora, even without any sign of even trying to perform some pantomime BUT unfortunately with a strong tendency to the inelegance of over-extensions.
Even so a good part of the audience seemed to have liked her. 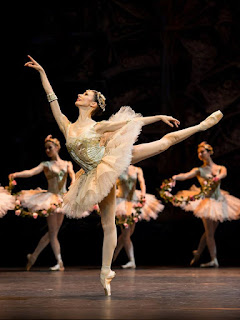 The real star of the evening, along with the choreography and production, was Liudmilla Konovalova as Gulnare. Very thin and looking better than ever, Miss Konovalova’s performance was one of pure joy. After having gone through two “turbulences” on the first act (because of bad partnering by the boys) she emerged as the Queen of the night. Complete in command of her technique she enjoyed the role the Gulnare with all its nuances. Such performances are rare. Performances that fill the audience with joy because of their sensibility, delicacy and strength at the same time and musicality (even adjusting without any effort to the wrong tempo, as mentioned above, given by the conductor). 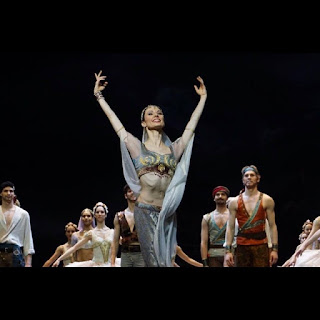 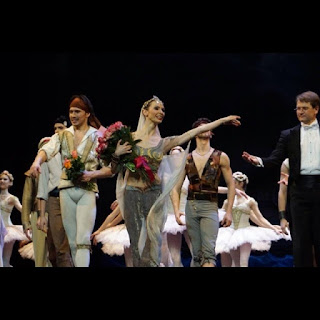 No coincidence, that, during the bows, all of a sudden Miss Konovalova was center stage: the deserving queen of the evening! Bravo!

Mr. Legris work and legacy to the Ballet world, already immense, increased enormously after last night’s world Première. I wonder how long it will still take until this work is “framed” in its definite version.
At the moment it is already a brilliant piece of work - with quite intricate parts in, if I may say so, very good Nureyev tradition. Yes. 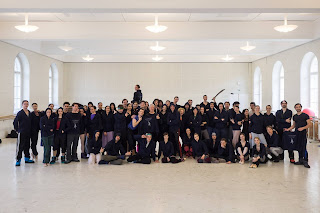 As Mr. Dominique Meyer mentioned during his speech in the after-Première Party: "this is an Opera House but the Ballet is now as important as the Opera..." 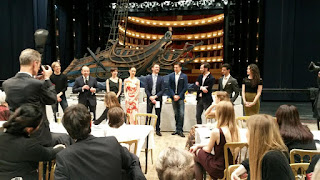 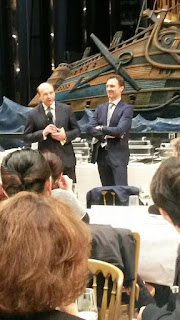 To be very honest, which Opera Director would/could not be happy about the financial aspect that is brought to the State Opera with the high occupancy, high percentage of seats sold for the ballet performances since the beginning of the "Legris Era"? Economically speaking this is a wonder - if you think about the sales' problems in the MET...

At this point, and to finish this long review, I would like to quote Dame Margot Fonteyn, a person whose thoughts about art I much admire:
"The first night is the worst possible time to make a hard and fast criticism: the baby never looks its best on the day it is born".

Thinking about that I would still like to add:
If this baby is already looking like this on its first night, so good, it is surely going to be a beauty, a star of first magnitude.

Dear Ricardo! Thank you so much! Kiss Igor


Danke Recardo!!!!! I enjoy to dance this performance very much

Thank you Ricardo! It's an honor to be part of such an important moment of the ballet history!

Thank you Ricardo! It's an honor to be part of such an important moment of the ballet history

Thank you so much!!!
Yes,I liked it really!of course!

Dear Ricardo!
Thank you! Great critic, even if I am not completely on your side on some cases. Maybe I am too much involved in the production....
Congratulation to your review!!
It's good to ready something from someone who understands ballet so well...


Thank you Ricardo for your warm words of my work !!!